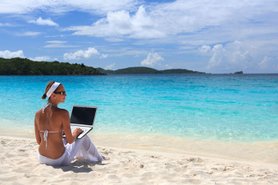 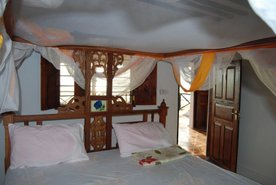 The Bungalow is fully furnished with 4 Zanzibar double beds and 1 single bed (total of 9 sleeps). On the terrace there are 4 sunbeds a table and plenty of chairs. Each floor has a bathroom with shower, toilet and sink. There is cold and hot water. The house has electricity with UK and European outlets. All bedrooms have Mosquito nets and fans in the ceiling. The kitchen has a combined electrical and gas cooker. There is a refrigirator with a freezer as well. Plates, glasses and kettlery is available for everyone. There is also a toaster, coffee machine and electrical kettle for water.

Downstairs there is a livingroom with sofas and a table. Beddings and towels are available in the house. Cleaning is provided every day or as agreed.

A night guard is always present outside the house for your security. 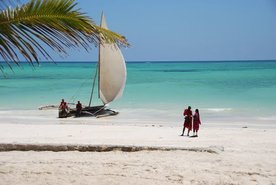 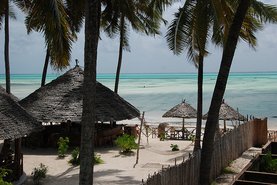 You can choose to cook for yourself, hire a chef to cook for you or eat out. Just let us know in advance if you want a chef to cook for you. If you are a larger group its very convenient to have a chef. Its very cheap and if you are many persons coming to a Restaurant the waiting time can be very long (1-2 hours). If you choose to eat out there are many restaurants and bars along the beach. There are also some local restaurants in the village. All restaurants serve delicious fresh fish dishes (catch of the day). Of course you can also find meat dishes, pasta and pizza. Although its a Muslim society most restaurants serve alcohol nowadays. Some of the best nearby Restaurants are: 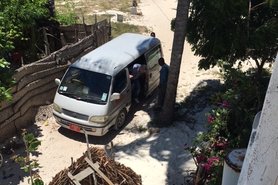 Jambiani is located on the South East coast of Zanzibar. You can reach it by car (1 hour from Stone Town) or the local bus (Dala Dala). Jass Villa is located in the old Fishing village South of White Sands Bungalows and Shehe Bungalows. South of Jass Villa lies Coral Rock and Red Monkey Lodge. 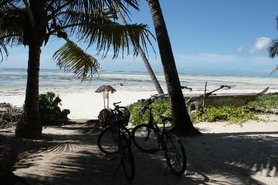 Wind: There are 2 wind seasons when kitesurfing is possible; 15 December to 15 March (North Wind) and 15 June to 15 October (South Wind)

Tide: Usually 2 times per day. One in the morning and one in the afternoon. Tide calendar 2016

Vaccine: Vaccine against Yellow fever is mandatory for visitors to Zanzibar. Don't forget to bring your yellow card. It's also advisable to take anti Malaria tablets.

Power: Bring flashlights since Jambiani has no streetlights. There is also power breaks several times per week. Usually they last a few hours. There is backup power in the house that has to be started manually. Mosquites: Use Mosquito net during night (installed above all beds) and bring roll on or spray if you will be out during the evening.

Money: US Dollars or Tanzanian Schillings, ATMs are availabe in Stone Town.

Alcohol beverages: Sold in most Restaurants but only available in shops in Stone Town.